We were told that most tourists come to Moscow searching for beers drinking vodka. If true, then we were where there to see beers drinking wine. But of course, much more brought us to Russia; the fast moving (sparkling) wine industry, the wines of Krim (through Legenda Kryma), and naturally Russia’s deep and rich history. Luckily it was all within grasp, at least we hoped, thanks to Anja’s Russian!

Legenda Kryma’s warm welcome for the several days we were in Moscow brought us first to the red square, where the -20 C surroundings gave the already magical place of tsars and revolutions a surreal look of mystery. Whereas the tsars were the first to bring wine to Moscow (in the 17th century by Pjotr the Great), thus most likely warming themselves by these means, we were invited to a more proletarian approach with a shot of vodka while entering a souvenir store. 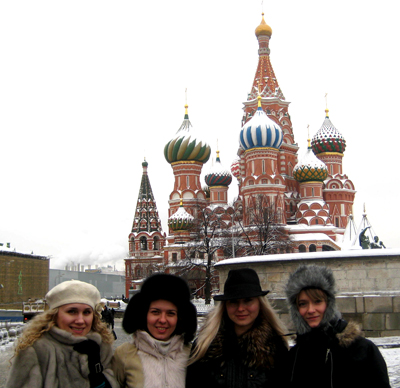 Thanks to Legenda Kryma: Our tour guides (and Anja).

As our Moscow tour continued, we soon discovered more Russian insights. For example, you still can’t take photographs of the (ex)KGB buildings; every car can choose on a whim to act as a private taxi if they see you with your hand out; all casinos in the country are closing; and everyone still loves to drink vodka (…well almost).

Overall, with all those whom we have talked to in Moscow, aka Muscovites, the city is changing from its recent soviet past. Whereas before it was joked that in Soviet times the workers pretended to work and the government did the same towards paying them, now Muscovites are taking charge of a complete turn-around in mentality, with most we talked to working long hours and weekends, commuting far through busy metros, all eager to partake in a life full of luxury and exclusivity. Holding to this, for our own tour of the city a chauffeur picked us up in a large black auto, tinted windows, in the style and grandeur expected from Moscow (so why taking ‘the most beautiful metro in the world’?). 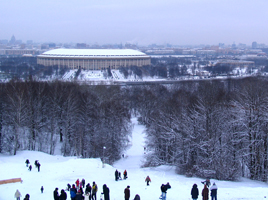 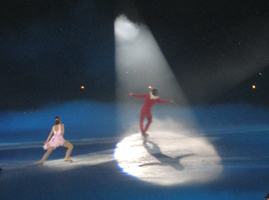 The magic of a winter Moscow: sledding overlooking the city, and the Nutcracker on Ice, again thanks to Legenda Kryma.

Our arrival coincided with the Orthodox Christmas, Rozhdestvo, celebrated on the 6th of January. Most everything is closed during this time, but we were fortunate to have staff of Legenda Kryma, enthusiastic for our project, guide and show us around despite this. The winter though we were told was the most beautiful time to be visiting, as it shrouds the city in cold, darkness, and puffs of defiant breath.

As for wines, it seems as though politics on top of culture plays a role in choosing its fate in Russia, as was seen when Moldovan wines were banned for 3 years following conflict after their separation in the 90s. Otherwise although 80% of sparkling wines consumed in Russia are from home soil (mainly from Krasnadarsky Kray), the second most popular region results in importation from Ukraine.

From these Ukrainian wines many legendary ones come from the Krim region of the country, which is what brought us to visit Legenda Kryma Importers in Moscow. The founder, Mikhail,fell in love with the wines of Krim during his visits there, and set his goal as sharing these gems and his passions with the Russian market. Unfortunately Mikhail couldn’t be in Moscow during our visit, but he organized a wonderful tasting and presentation for us on the Russian wine market and region of Krim (which we weren’t ourselves able to visit), all of which will be written about in our next blog, including the first 3 bottles collected towards the auction!

Join us next time as we discover Legenda Kryma’s tasting room, and explore further the trends of wine in Russia! 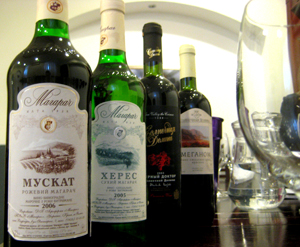 Next Blog: These and other wines, tasting!

This entry was posted in Russia, Uncategorized- All Blogs. Bookmark the permalink.