The Dark Legend from Krim and More!

What made our stay in Moscow so pleasant? Great wine, great people, and an inviting atmosphere! It is our second day in Moscow. Still no bears in sight, but we have found the grotto of wines, thanks to Legenda Kryma. To help us better understand the Russian wine industry and tastes, we were invited to taste a variety of Russian wines. Legenda Kryma actively tries to increase wine knowledge of those interested by offering educative tastings on the wide range of wines they offer. 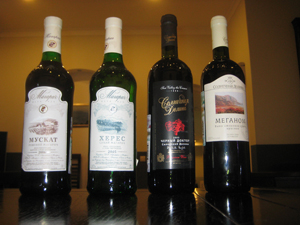 We were told that of dry wines, Russians prefer sparkling whites, and for all other types the pallet leans more towards preferring semi-sweets. This seems to coincide with a general preference for sweet (non-hard) alcohols in Russia, though we were told that a progression towards preferring dryer-reds is predicted for the future, perhaps thanks to the incoming generation. 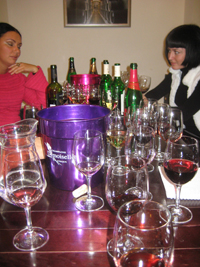 To open the tasting, we were treated with a 100% Cabernet Sauvignon sparkling red wine, following two more traditional sparkling whites (one of which officially earned the title of “Champagne” after winning the ‘Grand Prix’ in 1900 at the Paris World Fair). Just as delicious were the subsequent wines, one of which was shrouded in Legend.

A small taste of our great tasting and time spent with Legenda Kryma, Music thanks to ‘Spindreamer Music.’

…The Legend of the Black Doctor, and the Black Colonel.

“A long time ago, in a village lost deep within modern day Ukraine, lived a humble and peaceful doctor. A wise and astute man, the doctor had developed a potion able to treat all ailments, and he prescribed this to all patients under his care.

One day, an injured colonel stumbled into the village seeking care for his wounds. Villagers led him to the doctor and he was prescribed the usual remedy. With a distinct, though warmly familiar taste, the colonel drank his medicine which cured him on site. Astonished by the result, the colonel inquired as to the potion’s recipe.

The doctor, wise in his ways, knew that the recipe for a powerful medicine as such should only be given into trusted hands. As years passed, the doctor and the colonel developed a strong friendship, and the time had come to divulge his secret. The medicine, grown from vines on historic and sacred land, was a wine crafted by the hands of a doctor, and endowed with the energy of a deep and ancient people.

Soon after, called to war, the colonel left the doctor’s side to fulfill his duty to his people. While scouting in the woods in the loom of a great battle, a beer surprised the colonel and injured him gravely. Mortally wounded, the colonel ordered his men to rush him to his old friend. However, as the doctor was delivering a child and unable to receive the colonel, he prescribed several liters of wine to cure the colonel.

After delivering the baby, the doctor rushed to see his old friend and to see how he was healing. The colonel, looking through swollen and drunken eyes, saw a dark and blurred figure approaching him. In his state of trauma and madness, from both his injuries and remedy, the colonel mistook the doctor for his attacker, the bear, and drew his strengths and knife to serve to his defense and revenge. Stabbed in the heart, the doctor fell cold to the ground.

The legend thus names the doctor’s potion as thus, the wine so called ‘The Black Doctor,” to reflect the dark nature of his fate. The colonel, in despair after realizing what he had done, swore never to drink again, while devoting his life to crafting the same wine the doctor had taught him to make years before. This was thus named ‘The Black Colonel.’ ”

Special thanks to Legenda Kryma who has graciously donated a bottle of ‘the Black Colonel’ for our charity auction to be held in 2011.

Legenda Kryma has also donated two other legendary wines: one bottle of Novy Swet, a winery founded by Lev Golitsyn himself, earning the official name of “Champagne” for his wine. Novy Swet is the first “Champagne” wine of Russian origin. The second bottle kindly donated is a famous Pink Muscat from the winery Makarach. This is the first winery of Russian origin, founded in 1828.

Thank you very much to Legenda Kryma for its donation of legendary Russian wines!

Next Blog: Passengers on the Trans-Siberian Express!

This entry was posted in Russia, Uncategorized- All Blogs. Bookmark the permalink.