Early Italian Immigrants: Wine Culture in the South of Brazil

With a flight made long by anticipation, we were on the way from New York to Brazil. A new continent awaiting us, it was a return to the Southern Hemisphere but with a world of new culture, fusion, and history to discover. In fact, we arrived to the southernmost state of Brazil, Rio Grande do Sul, with one of the warmest welcomes we had yet received on the trip. The young, dynamic, and very enthusiastic group at Wines of Brazil invited us as like colleagues and family into their office in the little town of Bento Goncalves, forming our base for discovering the ever-amazing wines of Brazil.

If you look back far enough, Brazil has had a history with winemaking since 1532, when the Portuguese were settling the state of Sao Paulo. 1626 marked the year when missionaries brought vines to Rio Grande do Sul, but it was in the 1870s and beyond that a true culture of winemaking greater than that of the church had been able to nestle itself into Brazil, as Italian immigrants settled into the hilly and humid lands of the south, the so called Serra Gaucha.

Since those early days and by the hands of determined immigrants, over a century of hard work has resulted in Brazil becoming the fifth largest producer of wines in the Southern Hemisphere, with their 3.2 million hectoliters putting them right in line after Chile’s 8.4, South Africa’s 8.9, Australia’s 10.3, and Argentina’s 14.8. And as it is with all countries, not all wine can be considered the same, and we were very grateful for ‘Wines of Brazil’ to show us the most ambitious considered to be spearheading the way in quality for the industry, with our visits starting in the Serra Gaucha.

The Serra Gaucha proved to be the best place to start for an introduction to Brazilian wines, as the region accounts for nearly 90% of Brazilian wine production. Our base was Bento Goncalves, the capital of the wine industry, and from here we could see how the rolling hills, four seasons, and mild climate could surprise those skeptics judging Brazilian wine from a misconceived notion of a stereotypical weather for the country (no, here you cant have two harvest per year!). Here in the Serra Gaucha (and actually the rest of the south of Brazil) we saw how it was that this terroir had combined with modern winemaking practice to result in Brazilian sparkling wines that were taking the world by storm, and still-wines that were competing more than admirably, standing proud with the world’s best.

We owe many thanks to the wineries in the Serra Gaucha which invited us here, and to Wines of Brazil for making this portion of the project possible! 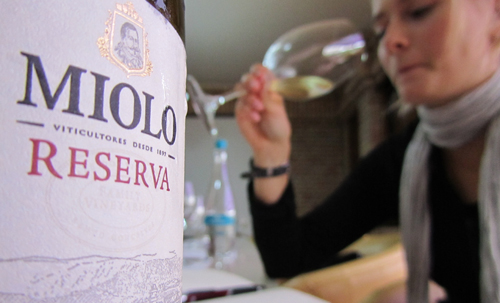 Miolo: The history of this old Brazilian family dates back to 1897 when Giusseppe Miolo arrived to Rio Grande do Sul. With a history of viticulture and selling grapes, 1970 marked the year when the family began pioneering fine wine grape growing, and they built their own winery bent on fine wine production in 1989. Since that time Miolo has grown to become a leading and highly recognizable figure in the Brazilian wine scene, undoubtedly due to their commitment to investment in technology and expertise, such as was seen with their hiring of Michel Rolland as a wine consultant in 2003. At the winery we were able to meet and discuss our project with Morgana Miolo, who has become a great supporter of our cause, donating a 6 liter bottle of Lote 43, an icon wine of the winery. Only produced in exceptional vintages, Lote 43 pays homage to Giusseppe Miolo, and will be an incredible showpiece for our auction!

Casa Valduga: In 1875 an Italian immigrant came to the south of Brazil, planting grapes for wine production. Now, this family business is being run by 3 brothers, decedents of the first immigrant, and Casa Valduga has become a leading Sparkling wine producer with one of the largest sparkling wine cellars in South America. We arrived during a slight rain which was beating down on the cobble stone paved roads of the winery, creating a magical feeling, and we were left mesmerized by the castle like interior which felt still be humble with the land. With the photo above we tried to portray this romantic feeling. Casa Valduga chooses to focus on the champenoise method of production for its sparkling wines, standing out from the majority of other producers. Also unique is their Grand Reserve Chardonnay (2009), which is aged in Romanian oak. Casa Valduga was the first to create an Enotourism complex in Brazil, showing its commitment to education of wine culture for guests and visitors!

Lidio Carraro: After 5 generations of grape growing in the region, Lidio Carraro began making fine wine in 2002. Ran by Lidio and his two sons and one daughter, the winery has a strict philosophy made to represent the terroir, using no pesticides or other additives during grape growth, and remaining barrel and oak free during wine maturation. They also own all the vineyards they use, ensuring their views are implemented throughout the year. Their intensive vineyard management results in very powerful, concentrated, and elegant wines, which have placed them as one of the most sought after high quality producers in Brazil! Pictured above with part of the family, we had a great tasting with what could be one of the friendliest and most inviting wine families in the world! The smiles say it all.

Aurora: Started in 1931 ago by Italian immigrants doing what they did best, planting their vineyards, Aurora is a cooperative winery where today over 1300 small individual families contribute their entire crop harvest each year. Walk into the winery (there are actually 13 separate units and it feels like a whole village) and you will be greeted by employees wearing traditional clothing of the time. And if you follow the same tour we saw, at the end you come across a great wine education room where people can come in for wine tastings, where about 30 people are accommodated per month. Aurora, like most wineries in Brazil is working hard to satisfy the domestic market before focusing too much abroad, and their wines are fruit forward and fresh, with not much oak. 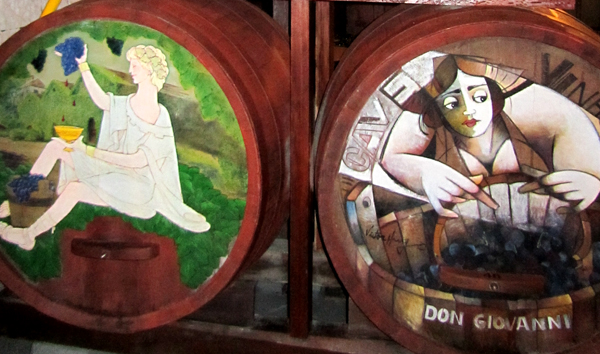 Don Giovanni: Just 12 Kilometers from our little town of Bento Goncalves brought us to Don Giovanni winery, started four generations ago, the winery is currently owned by Ayrton and Beatriz Dreher Giovannini. Growing many of the varietals the region uses, including Cabernet Sauvignon, Cabernet Franc, Merlot, Tannat, Ancelota, Pinot Noir, and Chardonnay, Don Giovanni focuses with what all of South American wineries seemed to prioritize, the Brazilian Market. A grape variety called Isabel is also grown on the property, to create a very high standard grape juice drink, something else that we noticed many wineries in Brazil were offering as well. Pictured above are painted barrels, showing the effort the owners have placed in making this property as charming as possible, with it also including a 1930s building restored into a hotel!

Geisse: Contracted by Moet and Chandon to run their Brazilian sparkling wine enterprise in 1976, Chilean agronomist and enologist Mario Geisse recognized the enormous potential of the region for making Sparkling wine, and began his own small winery partnered with Luis Catena from Argentina, soon after in 1979. Georges is pictured above with Mario, receiving a lesson on the champenoise method of sparkling wine production, showing yeast settlings on the bottom of the bottle. With bottles left for over a year in contact with the dead yeast, complexity and flavors emerge that would otherwise not be possible with another method! 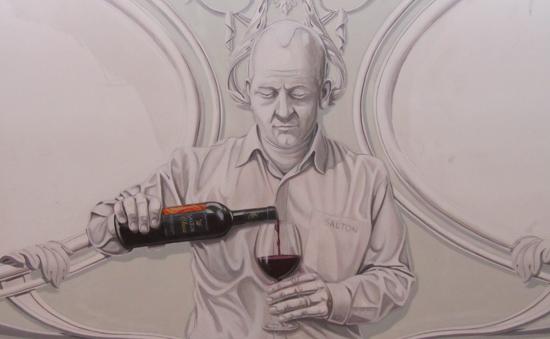 Salton: Another leader in the Brazilian wine scene, Salton has been around for over a century, with their focus always being to producing healthy and high quality wine, grape juice, and sparkling wine. We had a visit through the frescos painted throughout the visitor’s center, beautiful creations of a highly skilled local artist, still working on his masterpiece (part of which is pictured above). Outside we were witness to beautiful gardens decorating the entrance, a symbol of Salton’s dedication to nature. With a water treatment plant underground holding a volume of 3 million liters of water, waste water of the winery is treated here before being released back as purified water into the nature. They also organize environment awareness programs in schools, encouraging recycling, and recycle all organic matter coming from wine production, either through distilleries, fertilizer industries, or as animal food. Sounds great.

This entry was posted in Brazil, South America, Uncategorized- All Blogs. Bookmark the permalink.