Subregions of the Central Valley and Aconcagua! 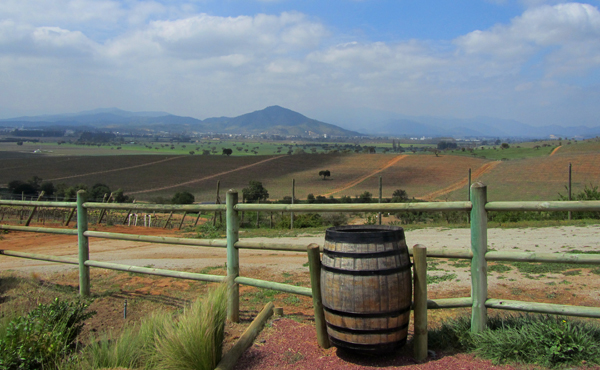 We continue now again in the Central Valley, in Curico and Cachapoal, and then travel to the Aconcagua greater region by visiting Casa Blanca, San Anthonio, and the Aconcagua sub region itself! We have many thanks to owe again to Wines of Chile and the producer’s generosity, and share with you their stories below!: 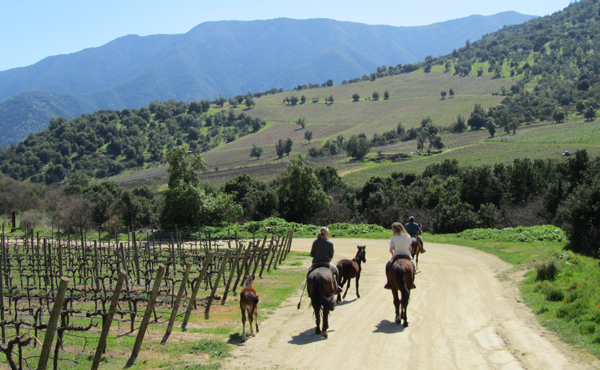 Altair: Here we saw the quintessential of what a Chilean winery feels like: Locked away in a magnificent valley surrounded by the drama of imposing mountains, with serenity blanketing the vineyards and valley, accompanied by horses ready to walk you through a peaceful Andean-like trek. And indeed, we did just that with Maria Jose (pictured above), and must admit that it is one of the best exclusive enotourism spots to discover! But don’t tell anyone! As for the wines, it’s normal if you see them sitting next to the best of the world, the winery was conceived sparing no detail towards this end: The vineyards are small, the yields low, and world-renowned experts have been brought in to oversee excellence in production and bring the newest oenological techniques to this already picture perfect winemaking paradise. 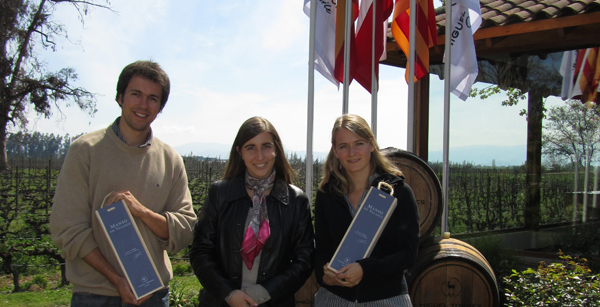 Miguel Torres: The winemaking activities of this ancient Spanish family began in 1800s in Spain with horse-drawn carriages transporting their wines in wooden barrels. With pioneering foresight they created a winery in Chile in 1979, being the first foreign company to back Chilean vineyard production, and bring modern oenological technology such as steel fermentation tanks. Now over 30 years later, their initial property of 100 hectares has grown to over 445, and they have plans to be fully organic very soon! Miguel Torres Maczassek is winemaker, 5th generation of the Torres family, and recently moved to oversee the vision of the winery. After the earthquake of 2010, the winery mobilized fast to rebuild employee and community houses, a symbol of their commitment to the local region. We are seen above with Caroline Margues, communication manager who gave us a great tour of the property and an even greater tasting! 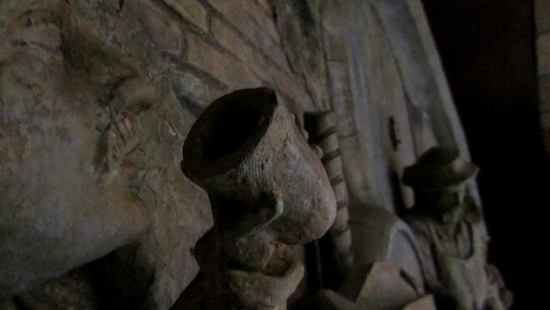 Aresti: The ‘Aresti Wine of Chile’ winery is a 100% family owned winery founded in 1951. After subsequent further investments in vineyards and technology, they began the ‘Aresti’ label that is distributed throughout the world today. The image above is of a stone sculpture in the cellar, itself a representation of the wine’s label, from a historic painting depicting the family’s history. The painting won a gold medal in an exhibition in the Belle Arts Museum in Santiago during Chile’s centennial celebration, and is titled “Harvest at the Bellavista Hacienda.” The family is now in its third generation working in the winery, and make up most of the board of directors, along with international experts, working to ensure the carried on tradition of the Aresti name and label! 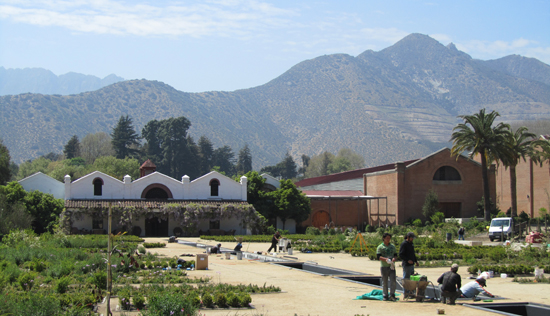 Errázuriz: 100 kms North of Santiago, Viña Errázuriz was founded over 100 years ago, in 1870 by Don Maximiano Errázuriz. Don Maximiano Errázuriz’s 6th generation descendent, Eduardo Chadwick, oversees the winemaking and production, and is credited for bringing the Shiraz grape to Chile. But the Errázuriz family has much more history tied to Chile than just this. The Errázuriz family has given Chile four presidents of the Republic, two Archbishops of Santiago, and several more diplomats, writers and industrialists! With such impact on the country, it’s normal that the wine industry sees it too! When you enter the wine estates grounds its clear history is bounding too, with three different wineries kept side by side symbolizing the different eras of the family empire, it’s almost an architectural park. A modern building captures the eye with is gleaming water fountain (designed to reflect light and heat to the winery in the winter, while cooling it in the summer), while an old 1800s style colonial winery sits by its side, kept pristine by its wisdom!

Seña: Created in 1995, Seña is known to be the first Icon Wine from Chile. The name itself implied a distinguishing mark or personal signature, and the winery stands for just that, as it was created by a cooperation between two of the greats in the wine world. Robert Mondavi visited Chile in 1990, and while recognizing the potential of the land for producing incredible wines, teamed with winemaker Eduardo Charwick, whose winery, Vina Errazuriz (see above) was over 100 years old and had been always recognized as a top quality producer from Chile. The two winemaking families teamed together to create Seña, searching for 4 years throughout Chile to find the perfect terroir. 41km from the Pacific Ocean, in the western end of the Aconcagua Valley, they found just what they were looking for. Fully farmed under biodynamic principles, even with plans to develop a school for biodynamic practices, the winery is led by Eduardo Chadwick to achieve their original goal of representing the terroir in its complete honesty, as an Icon Wine of Chile! 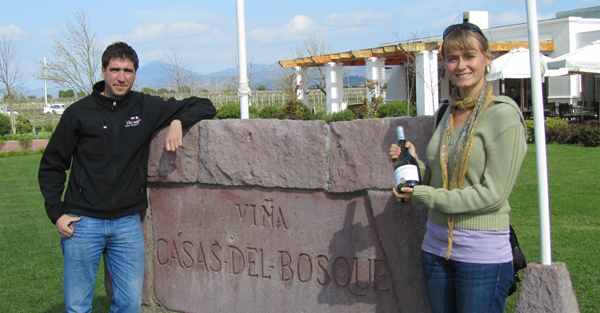 Casas del Bosque: Located just 70km west of Santiago, and 30km from one of the principal ports of Chile, Valparaiso, and the old capital of the country, Casas del Bosque, was founded in 1993. Located in an area of ancient pine and Olive forests, the name means, ‘Houses of the Woods.’ The idea was to have it be a family boutique winery working only on high quality wines. It is one of the few wineries in Chile recognized for specializing in Sauvignon Blanc. It is also the region it is located in, Casa Blanca, which has reached international reputation abroad for producing fantastic Sauvignon Blancs. One of the first family wineries in the area and the dream of an Italian immigrant’s son, Casas del Bosque continues today to emphasize its focus on quality in the production of its wines. 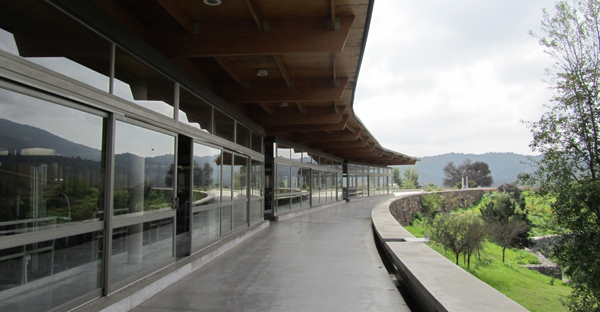 Matetic: Located in the Rosario Valley of the San Anthonio region, Matetic began in 1999 when the Matetic family, originally from Croatia and 3rd generation Chilean, recognized the great potential of Chile’s climate and soil! The winery itself was designed by Lawrence Odfjell, the same architect who created the Odfjell winery of our last blog visit. It has been created state-of-the-art, with gravity flow design, and blends seamlessly into the regional landscape. The winery also offers great enotourism destinations with their own restaurant and resort haciendas, pushing this aspect of Chile and wine forward. The wines too are fully organic, producing natural wines.

~Anja and Georges, signing off with the Chilean Wine Bottle Donations, with a backdrop of Santiago City!

This entry was posted in Chile, South America, Uncategorized- All Blogs. Bookmark the permalink.