Just a simple bus crossing over from Santiago the Capital of Chile brought us to Argentina’s capital of wine: Mendoza. Located in the eastern foothills of the Andes and producing about 65% of Argentina’s wine, it has its roots tied deep in history. We visited the first winery constructed there, Norton winery, which was started in 1895 by an English railway engineer who settled the area after his contract ended working to unite the continent by rail. This region of Mendoza, ‘Cuyo,’ is largely seen as one of the top wine production areas of Mendoza. Like much of Mendoza, Cuyo is characterized by a great climate for grape production, particularly Malbec, which has grown famous here. We were told that there are over 300 Sunny days per year, perfect for grape ripening, and the desert like conditions stress the plants while irrigation systems coming from Snowmelt from the Andes gives the vines just what they need. This region though can also be plagued by hail storms as is common in dry mountainous regions, but clever thinking in early vineyard management planted olive trees between vines to protect the fruit, as we saw and learned at Achaval Ferrer, a winery started in 1996 with old vineyards. 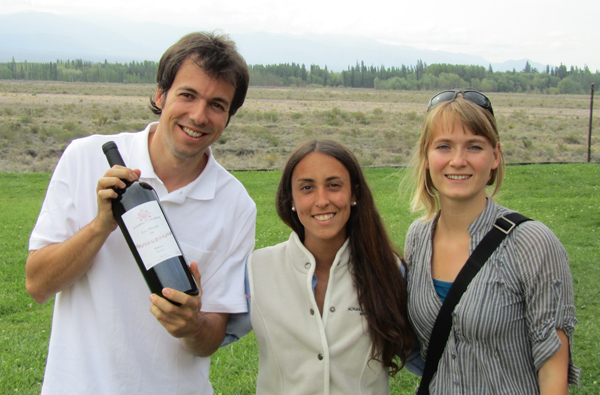 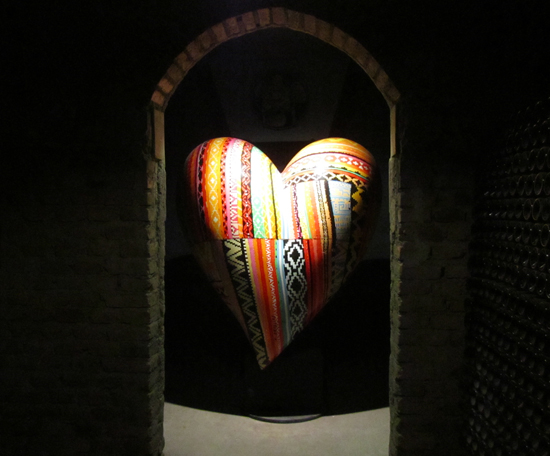 Norton, and their heart donated by the local Hospital in recognition of their help to purchase heart surgery equipment.

The true benefit of Mendoza’s topography can perhaps best be described by Terrazza’s motto, another winery from Cuyo, who claim that each grape varietal requires its particular altitude for best maturation. With vineyard areas that can vary in altitude from 900 meters to 1,200 meters above sea level, matching grape varietals to altitudes is something especially possible in Mendoza’s terraced plateaus leading up to the Andes. Our last winery in Cuyo, Viña Cobos, showed us just how this area gathered international recognition as Napa Valley winemaker Paul Hobbes teamed with Argentinean winemaking partners Andrea Marchiori and Luis Barraud, who use the climate not just for making outstanding wines but also to produce biodynamic ones. Though the conditions as compared to Chile are somewhat different, the potential also exists to have a pest-free area and use organic or biodynamic practices.

Viña Cobos, with winemaker/co-owner Luis Barraud, at a secret restaurant-resort just near the winery that is an absolute must-visit.

In fact, it’s not just Cuyo who gathered international attention, Uco, another region in Mendoza, has caught the eye of quite a few international winemaking legends. Particularly, Michel Rolland settled himself there with a group of 6 other renowned Bordeaux chateaux owners creating the ‘Clos de los Siete’. Together, the group has made 5 wineries owned each by one or two of the group, and all wineries contribute a portion of their best wine which becomes blended by Michel Rolland to create the ‘Clos de los Siete’ icon wine. In the Clos, we had fortune to visit several of the wineries. At Flecha de los Andes we spent much time with assistant winemaker Gastón Sepúlveda, who showed us Uco wine and life highlights, while at DiamAndes we had a specially made tour and tasting since the facilities aren’t yet open, and saw where the future giant Diamond sculpture will blend into the backdrop of the Andes. Monteviejo winery was still undergoing construction when we arrived so we were unable to visit, but we are very grateful for their contribution to the auction!

It’s not just the Clos de los Siete who came from France recognizing Mendoza’s potential, Cheval des Andes was created by Terrazas from Cuyo (itself started by Moet and Chandon from France), and Cheval Blanc, a Bordeaux (Saint Emilion) first growth. We met with chief winemaker from France Nicolas Audebert, who wouldn’t trade anything for the freedom found in Argentina, Mendoza wine, and the country’s tradition with horses. Indeed, Cheval des Andes houses horse polo teams and it’s not uncommon to see them holding wine glasses too while playing the sport! 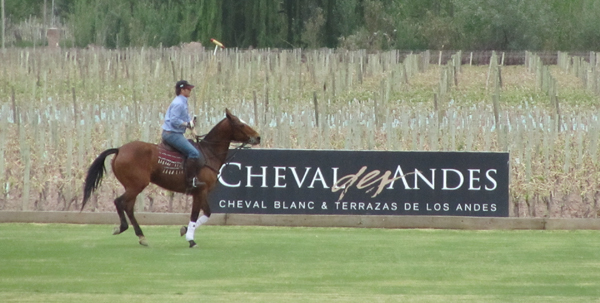 In Uco we were happy to receive great donations and be able to visit two other wineries, Salentein, and O. Fournier. Salentein was one of the only wineries we saw on our visit through wine regions of the world that was started by a Dutch family, who upon discovering Argentina fell in love with its culture and wine potential. Their first vintage was in 1999 and they have been making great wines since then, but perhaps the most alluring reason to visit is the enchanting cellar room inspired by ancient temple architecture, and their museum of contemporary, modern, and historic Dutch art. The museum is a venture which is seemingly as large as the winery itself and which shows the Salentein family’s attention for the aesthetic over all other, something reflected in the wine as well! 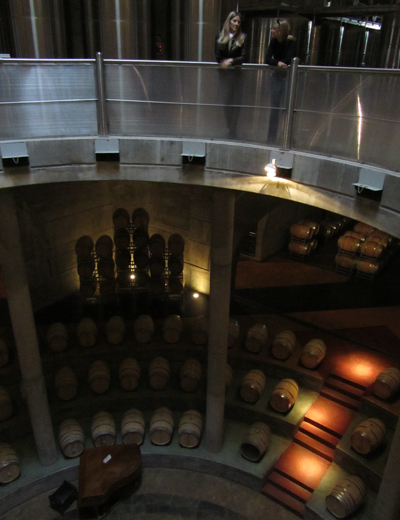 Salentein and their mystical cellar room

O. Fournier from Uco is perhaps the best winery to end with in this blog, to make full circle back to the origin of the lands. The symbol they use on their label for the winery is of the local Rhea (a flightless bird similar to an Ostrich), which represented the joining of the earth and sky to the Argentinean Mocavi Natives. The names of their wines ‘Alfa Crux’ and ‘B Crux,’ are based on the stars of the Southern Cross, a constellation hanging only above the Austral Hemisphere, the southern portion of the earth.

O. Fournier and the ‘Southern Cross’ of their cellar.

~Anja and Georges, signing off with a view of the Andes from the Clos de los Siete:

This entry was posted in Argentina, South America, Uncategorized- All Blogs. Bookmark the permalink.