If you keep eastwards and trace a line from the popular viticultural areas of Chile and Argentina, you will inevitably come across the latitude where Uruguay‘s vines also thrive. Bounded by the River Plate in the south, Brazil in the north, Argentina on the west and the Atlantic Ocean to the east, Uruguay is home to a mild climate, endless rolling hills, and perfect terroir for many different grape varietals. Particularly, the Tannat from this little country has been catching the attention of the world, a varietal introduced from France/Basque in the late 1800s. What marked us the most though while in Uruguay was the relaxed and friendly atmosphere that seemed to await us at every winery and in the cities. Most owners of the wineries came to receive us themselves, and most wineries we visited were family run, something we did not have much opportunity to encounter in other wineries of the world, where you might become lost in their size and enterprise. Here we were visiting families of viticulturists, with deep traditions of wine, who humbly set themselves out to make a business of their passions.

The capital of the country is named after the first words of the Portuguese discoverers of the area (‘Monte-vide-eo,’ or, ‘I see a mountain!’), and lies in close proximity to most of the wineries, just a few hours’ drive inland from the port-city. A perfect base for discovering the wineries and wine regions, it seems inevitable that Uruguay, the so-called land of the river of painted birds (in native dialect), will soon become an Enotourism hotspot. We owe many thanks to Wines of Uruguay for sharing this with us and helping during this portion of our project, and to the wineries who joined our cause! 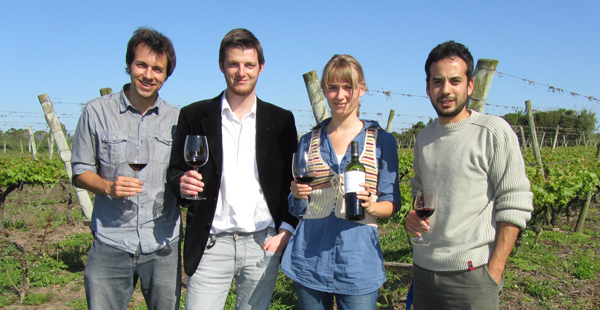 Gimenez Mendez: Like most of the charming Uruguayan wineries, Gimenez Mendez is fully owned and managed by the family, and we can be seen standing in the vineyards with winemaker Mauro to the right, a son of the family. Since his father passed away, Mauro is now working with his 2 other siblings and his Mother, who was president of the Wines of Uruguay association, and they continue to create the Gimenez Mendez wine expressing quality, Uruguayan terroir and innovation. One such thing which caught our eye was the ‘Puzzle’ wine, a blend of 15 varietals of which 10 were red and 5 white! 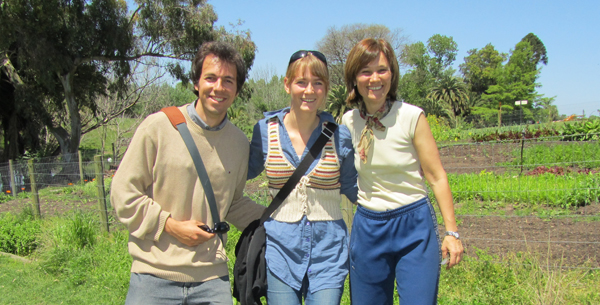 Bouza: We are seen here on a veggie picking day with the owner of Bouza, Eliza, out in the garden which is used to cook all fresh meals for the onsite restaurant. The gardens and vineyards are definitely worth the walk through, as green grass and blue skies are the backdrop for an invitation. The building that the Bouza winery sits in is a marvel in of itself too. Built in 1942 as a church, it is now used as this family run winery’s cellars, lab, and fermentation area, and has water from the nearby reservoir running through its walls to naturally cool and humidify the building. And if visitors didn’t have enough, there also happens to be a collection of classic cars set up as a museum at the entrance of the dining area which belong to the Bouza family. It showcases more than 30 cars representing Uruguayan life of the 1920s and 1930s! 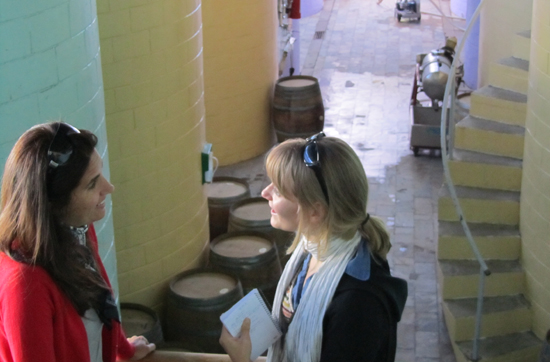 Bodegas Carrau: The leader in innovation throughout Uruguay’s winemaking history is hands down the Carrau family. In 1930 they were the first to export wine, and in 1973 they are credited as being the first to introduce the idea of having Tannat be the country’s main top reserve style red wine grape. Today they continue their innovation and leadership of the Uruguayan wine industry, as Carrau’s winemaker Dr. Francisco Carrau runs a vineyard-based research and development plan, one goal of which is to rejuvenating old vineyards with clonal selection. Anja is pictured above with Francisco’s sister, Margarita, with a backdrop of what is perhaps the most colorfully calming winery to work in! The Carrau family winery is continuing its family traditions, and soon the 10th generation will begin taking part in the winemaking decisions! 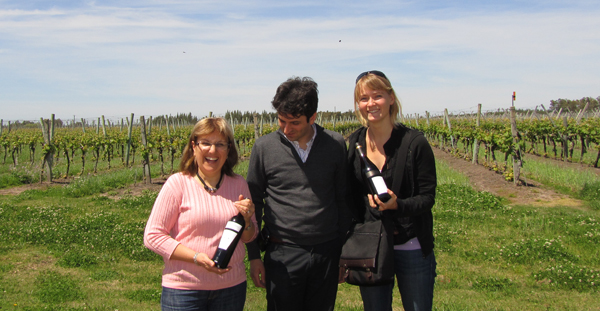 Marichal: The Marichal family, descendents of immigrants coming from the Canary Islands to Uruguay, began planting vineyards of Tannat in the 1910s. In the 1980s the family converted and reinvested in its winemaking techniques and began producing higher quality wines. Today, the family is still running the vineyards and winery, and we were very happy to receive a very personal tour. If you are lucky enough to enjoy a tasting at the winery, be sure to try the traditional mini Empanadas cooked by Lidia Santos, pictured above and the mother in the family! Her two sons Juan Andrés and Alejandro are now in charge of the winery, ensuring the family tradition lives on! The Tannats were amazing, but if you ask them their opinion, you will hear that they are convinced Pinot Noir is secretly the perfect grape for Uruguay, it just has to be picked at the right time! Not surprisingly, Marichal also makes a great Pinot Noir! 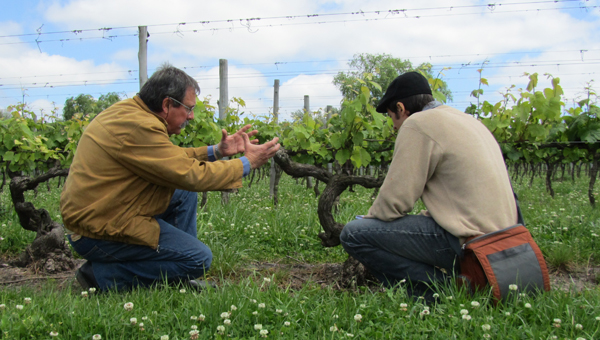 Pisano: The Pisano family is definitely one of the most charismatic winemaking families in Uruguay, just look at some of their advertisements to see why. The three brothers running the show, Daniel (pictured with Georges above), Eduardo, and Gustavo have successfully made the little winery become the most exported wine in Uruguay, and have been the reason for its progress and innovation. Their great grandfather came to Uruguay as an immigrant from Italy, and their grandfather settled the Progreso region that they now live in. It was in 1924 that the Pisano family would first make wine, and the tradition has been kept up ever since. Now with 8 boys in the family (promoting Daniel’s theory that Tannat’s strong tannins result in a predisposition for more male births), the tradition is continuing onward in time. Everyone lends a hand, and one of Daniel’s nephews is even starting his own wine label on the side, Vina Progresso. The concept of this one is open barrel fermentation, a foot powered crush, and very limited production (with a charity bottle for our auction!)! We could go on and on with the Pisano family’s stories, such as with Daniel’s wife who makes illustrations for their labels, reflecting dreams she has at night, or about their first-ever sparkling tannat wine. Or perhaps we could mention the story of their smuggling rootstock vines from Argentina for planting, or perhaps recount a story about one row of their grandfather’s vines which have been kept planted just for sentimental reasons (the vines are pictured above). Without a doubt, we would also mention the amazing steak that Daniel can cook… in all cases, the stories and good times go on! 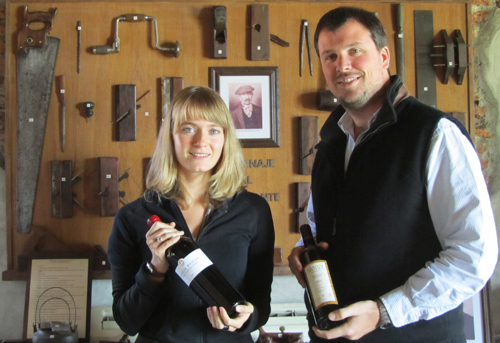 Familia Deicas: This winery, also known as Establecimiento Juanico for historic reasons as it was the first in the Juanico region, established by Mr. Francisco Juanicó, is now in its 3rd generation of the Deicas family running the business. Interestingly, before 1979 when the Deicas family took it over, the facilities were made primarily to make Cognac. Because of Uruguay’s help to France during World War II, France showed its thanks by sharing the secrets to making Cognac, and granting Establecimiento Juanico the only license outside of France to name its product ‘Cognac.’ Today, Familia Deicas is focused on high quality Uruguayan wines, and along with the other wineries on this page, is top of its class. Nicolas, export manager of Familia Deicas and pictured above with Anja, received us with a large plate of cheeses, meats, empanadas and wines to taste, and made sure the family style feeling of Uruguay was prominently felt during our visit of the premises!

~Anja and Georges, signing off with a delicious Uruguayan steak meal, Pisano-style! 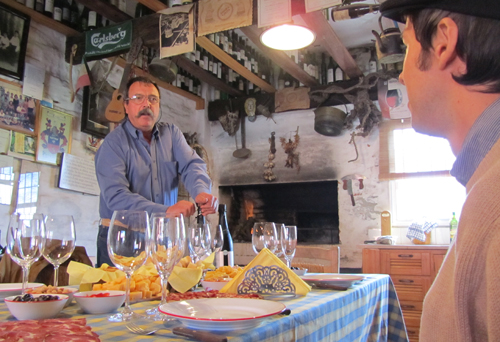 This entry was posted in South America, Uncategorized- All Blogs, Uruguay. Bookmark the permalink.