From Clinging Cliffs to Sprawling Plains 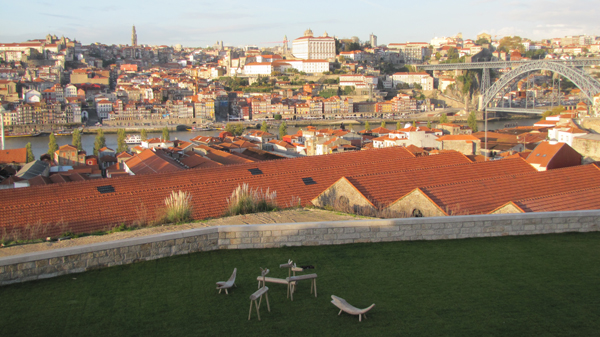 Porto, as viewed from the Yeatman Hotel

We had just spent 9 and a half months traveling through the length and breadth of the New World of Wine, and Portugal would become our first step back into the realm of the ‘Old World.’ Who we had helping us though would define the nature of our visits, and we happened to have some of the friendliest and most open minded crowed on our side: the wine bloggers.

Our trip through Portugal owes special thanks to Catavino, who did everything to put us in touch with the best people in the region and organized visits to the most outstanding and interesting wineries. We were able to discover one of the most beautiful wine regions in the world, the Douro in the north Portugal, thanks to our companion guide wine-blogger Filipe José Carvalho. We were also able to discover the Alentejo of the south of Portugal, with our inspirational friends André Ribeirinho from the Adegga project (an innovative and utterly important initiative to internationally catalog wines by ‘AVINs’, while creating a social-media outlet for everyone to give their reviews) and Carrie and Hans Jorgensen from the Cortes de Cima Winery. Our step back into Europe to discover its Old Wine World after the New World was in the best of hands possible.

We almost couldn’t believe our eyes as we passed through the windy hills of the Douro, gazing into gorgeous river valleys and looked across at cliff-growing vineyards sometimes being not more than just 1 or 2 rows wide, terraced into the landscape. Centered on the Douro River, the region is located upstream from the famous city of Porto. It’s history is irrevocably tied to the production of Port wine, where most Douro wines would be fortified and travel down the river to be aged in Porto, and because of this the region is the first in the world to have been formally demarcated (in 1756). The region though has recently begun realizing the potential of its grapes to produce amazing non-fortified normal wines, and an explosion of discovery has begun to occur.

The vineyards, which traditionally were planted to produce fortified wines, have been found to contain over 30 to 40 different vine varietals! This firstly creates beautiful orange, yellow, and red dotted vineyards in the autumn, which is when we went, but also creates a rich complexity in the wines, which essentially become blends of all of these varietals. Of these, the most common tend to be Touriga Nacional, Touriga Francesa, and Tinta Roriz (the same as Spain’s Tempranillo), but many more exist and many more continue to be classified and discovered even today. Portugal seems to contain and cultivate one of the most diverse groups of grape varietals in the world!

Villar d’Allen Estate (Porto): Port wine blenders and traders, Villar d’Allen searches yearly for the top aged ports and creates their unique blends signature for the family. Recently Resurrected as Port merchants, the family has had a centuries old history with wine and port! We toured their 1785 house and the first ‘Romantic Garden’ of Portugal with the d’Allen family, Tomas, his father (pictured above) and mother, and even got to see their private port wine cellar which has bottles dating as old as 1805!

Quinta da Gaivosa: At the top of world overlooking Douro vineyards from Quinta da Gaivosa, with over 100 year old vines below us. Here we are visiting with Alves de Sousa, the 4th generation continuing the tradition. This amazing vineyard leading down into a valley of the Douro shows perfectly the determination the Douro Portuguese had to hard-carve vineyard terraces into the hill faces!

Aneto: Here we are pictured with Francisco Montenegro, winemaker who conceived of ‘Aneto’. A small cult winery concept launched in 2004, Francisco consults for many wineries around the Douro while making his dream a reality. While creating great blends of the traditional Touriga National and other Portuguese grapes, he also has been focusing on Pinot Noir, as one of the few in the region to do so!

Quinta dos Aciprestes: Here pictured above with Viticulturist Alberto from the Quinta dos Aciprestes (Velha Royal Group). We learned that the secret to great wines is to plant in regions of poor soil (it’s even biblically quoted), and that the Douro’s tendency to have many varietals in one vineyard comes from the need to resist against weather fluctuations, when one vine might suffer another could still thrive. Alberto might very well be the most enthusiastic viticulturist we have met on our project, running up and down Douro valley vineyard cliffs to grab grape clusters to show us the different varietal characteristics!

Wine and Soul: With Rita Mendes we were able to visit another cult-wine idea based winery. Started in 2001, the idea is to have the best grapes in the region, and crush with their feet! The winery makes 3 different wines in this style which isn’t seen too often anymore!

Quinta de San Jose: Again at the top of the world, the Douro River sits below us as we stand with Joao Brito e Cunha discussing the concept of his winery. The grandson of a very insightful woman who decided to purchase vineyard land while the phyloxera vineyard pandemic was reaching Douro and sweeping through Europe, and when winery’s everywhere were selling their lands which were then considered lost. Joao is now creating his wine label with these majestically sitting vines!

Quinta do Crasto: The 3rd largest and certainly one of the most awarded wineries in the Region, Quinta do Crasto began with port making in 1645. Part of the exclusive ‘Douro Boys’ group of pioneering wineries, the winery began entering the realm of table, or ‘traditional’ (not fortified), winemaking in 1994. Their vineyards and wines are a splendid representation of the Douro, with almost 40% of their vineyards consisted of old vines, of randomly distributed varietals. They have begun to characterize their vineyards, finding already over 35 different varietals contributing to their characteristically complex wines.

Quinta de Napoles: Here with the winemaker at Quinta de Napoles better known as Niepoort, we had the privilege to visit this outstanding winery of the Douro creating some of the most premium and highly regarded wines of the region. Centuries ago a Dutch family by the name of Niepoort came as merchants to the region, and today the descendents continue to carry on the name and tradition of this Portuguese wine! We owe many special thanks to Verona and Dirk Niepoort whose gracious contribution to our project will be an incredible showpiece for the auction!

Quinta do Seixo: Part of the Sogrape group but best known for their port wine ‘Sandeman,’ we had the honor to meet with head winemaker Luis Sattomayor, pictured above. In 1790 George Sandeman came from Scotland establishing a Port lodge (where the fortified Douro wine is aged in casks to transform into Port wine), and the symbol of the Don is now a worldwide recognizable image!

Quinta Vale de Maria: Another emerging small cult wine mentality winery, Quinta Vale De Maria produces its wines knowing exactly from which each vineyard the wines are from in Barrel, and of the 30+ varietals present therein! We are pictured above discussing the 2010 vintage, which was a harsh year, but the wine seems to recover and release itself!

Oscar Quevedo: Perhaps the most forward thinking winery of the Douro, we met with Oscar (whose father is also Oscar) pictured above (left), the 5th generation of the family winemaking business which started in 1883! Coming back to the family business, Oscar has quickly become a legend in the Douro, blogging everything about the wine, tweeting, an early promoter of the Adegga project, and is all-around bringing a fresh new viewpoint to the region! Oscar made the Douro feel like home, as we enjoyed dinner with the Quevedo family!

Graham’s: Also known as Symington’s, as this winery/port-lodge was created by the Graham and Symington families, Graham’s has been established in Portugal for nearly 200 years. They claim their success in the world, as most people associate Port to the name, comes from their family run business attitude. We had a great tour viewing the Port-Lodge where their wine is aged, awaiting the final blending and/or bottling and to bear the ‘Graham’s’ name!

We left the Douro traveling down south from Porto towards Lisbon, and thanks to Adegga’s founder André Ribeirinho we were able to reach the heart of the Alentejo. The Alentejo itself covers about 30% of the whole of Portugal, being reputed for its world-famous (and needed!) cork production, and now too for its wines. Thanks to Adegga and Cortes de Cima winery, we were able to visit some great producers of the region (including Cortes de Cima!)!

Cortes de Cima: Standing out above the crowd is Cortes de Cima, not afraid to be the tree which catches the wind. The first to bring Syrah to the region – before it was even legal to grow it due to appellation restrictions, Cortes de Cima knew the potential of the grape in their homeland and deemed their wine ‘Incognito.’ It has won many awards and today the region allows and even encourages Syrah to be planted, as it thrives in the area. Started by Danish – American couple Hans and Carrie Jorgensen, they chose the spot after living 24 years in Malasia and sailing the world looking for the best location. This happened to be it, for them, and the Syrah. With Carrie and Hans the winery continues to experiment and refine, using Smart-Dyson trellising, having solar panels built to reflect heat and cool the winery, using lighter than normal bottles, and many micro-tanks are just a small example of what they have going on, always geared towards efficiency, the environment, and making great wine!

Quinta do Quetzal: Started in 2001 and owned by Sis de Buin from the Netherlands, the winery is another highlight of the Alentejo. It was interesting to see them grafting white varietals on red rootstocks which might be better suited for the soil, and with many award-winning wines their donation will be a great contribution to the auction!

Herdade Malhadinha: A great hotel and restaurant awaits the wine tourist who comes to this winery. 2003 was their first vintage and they haven’t stopped rising in popularity. And what’s more, their several young children are already involved in the family business, drawing the labels!

Herdade de Rocim: Started in 2007, this magnificent winery is new on the scene of Alentejo and stirring things up. Also having a great little restaurant for those coming here as a destination, the wines will perfectly complement a beautiful day in the Alentejo made with care and dedication by the family.

Vini Portugal: We had a special visit to Vini Portugal, who collected several wines of top producers to donate to the auction, and set up tastings and an educative program for us. Vini Portugal works on special projects to promote export, and is the binding force uniting Portuguese wineries. We were very happy to have wines added to our auction coming from the Dão (Casa de Santar, and Quinta das Marias) and Peninsula Setúbal (Horacio Simoes) regions to provide a broader understanding to bidders of Portugal’s diversity! The Peninsula Setúbal lies across the estuary of the River Tagus directly south of Lisbon, and the Dão is a mountainous region where Touriga National originates (The most popular grape of the Douro, see above, and a common one in all of Portugal!).

~Anja and Georges, signing off with the largest cork in the world, from the Yeatman Hotel! 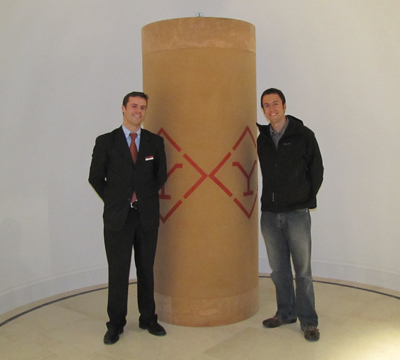 This entry was posted in Europe, Portugal, Uncategorized- All Blogs. Bookmark the permalink.