The Depth and Character of Italy

Home to some of the absolute oldest wine-producing regions in the world and with over 1 million vineyards under cultivation, we came to Italy, the second largest wine producer in the world (right after France)! Interestingly though, with their title at second largest producer, they happen to rank first as the largest consumer of wine per capita in the world, which to us clearly meant they like to keep what they make (its only just in 2010 that international sales outweighed domestic sales of Italian wine in Italy)! Historically, Romans began producing wine in the 2nd century BC, but the Etruscans and Greeks settling in the regions predated Roman winemaking times by far! We were able to go to two of the top regions of production, Piemonte and Italy, but with so many fabulous wines coming from many unique regions, it would have been possible to have spent the whole year itself just discovering Italy’s viticulture.

The province of Piedmont (or ‘Piemonte’) lies in the northwestern corner of Italy, and is home to the famous Barolo and Barbaresco wines, of the Nebbiolo grape. Literally, the name Piedmont means ‘at the foot of the mountain,’ which can be dramatically understood by seeing the photo above! If we could, we would keep this region a secret, but it wouldn’t be fair to the generous producers who opened their homes welcoming us (and to all of you who we know would really enjoy this)! Our time in the Piemonte was characterized by a warmth of local welcome despite the cold of the winter, beautiful history, amazing food (Piemonte is home to the truffle mushroom!), and some of the best wines in the world to accompany it all. We were guided by the one-and-only world-traveling adventurist and wine consultant Sebastiano Ramello , whom we met once again thanks to the help of Wink Lorch from Wine Travel Guides. Sebastiano, being the avid traveler that he is (in 2010 he had already been around the world 3 times while we were meagerly trying to complete our 1) and always interested in projects to do good in the world, immediately related to our cause and invited us with arms wide open! We owe special thanks to him for putting us in contact with (great) Piemonte wineries, and sharing with us the special and unforgettable culture of the Piemonte. 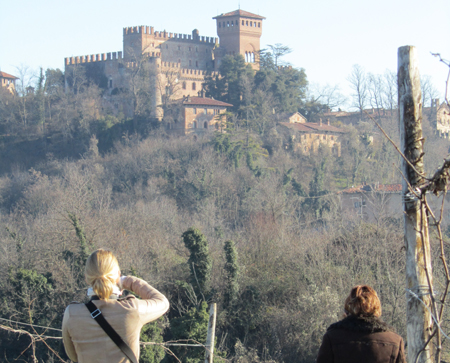 Castello di Gabiano: We were housed and welcomed at the Castello di Gabiano, the beautiful and historic castle winery. Pictured above is the dramatic view of the imposing Castello, guarding the vines enveloping the surroundings. Until the 1950s, the little town of Gabiano had almost all of its 500 inhabitants working at the Castello. Though the Castello dates back centuries, the winery started officially in 1935 under the guidance of the Marchesi owning the premises, as we learned from marketing director Katia also pictured above. Our tasting of the Castello’s wines was led by Delfina, and were almost awe-struck by the Il Ruvo 2009, a great balance with aromas of juicy strawberries coming from the very difficult to grow Grignolio grape! If this sounds even only remotely intriguing than we highly recommend you to visit and stay at the Castello itself, on your wine tour of the Piemonte! 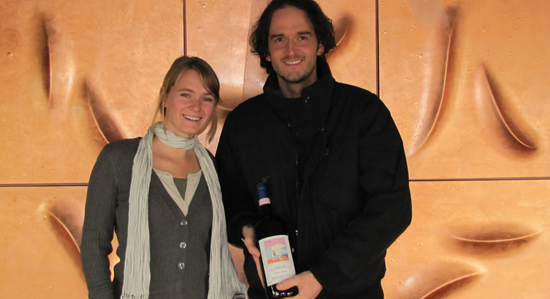 Roberto Voerzio: Davide, pictured above, and his father Roberto, run the winery together and make all winemaking decisions. Over the years the winery has become a legend of the area, making some of the most highly awarded and sought after wines around. Its surely due to their organic practices and close relationship with their vineyards (including 6 separate plots of Barolo kept for perfect blending), and their signature touch. Despite their extremely high profile name which may make things intimidating for a visit, we felt quite at home and comfortable touring and tasting with Davide, and truly understand why these wines fetch such high prices and have earned such a reputation: its the down-to-earth approach needed to grow great grapes, and age incredible wines! 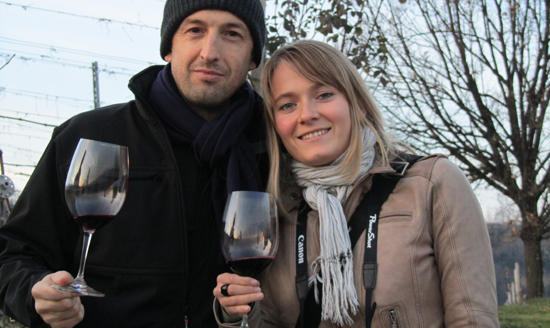 Ghiomo: We met with Mr. Giuseppino who after welcoming us with a platter of delicious local cheeses, meets, and his favorite wines, took us out to the vineyards for a start-to-finish tasting to understand the origin and journey of his wine (pictured above!). When Giuseppino took over the family winery from his father in 1999, he decided to do things differently and bring forth the style of Piemonte which focuses on high quality wines. With 10 hectares of vineyards to make his dream wine come true, Giuseppino also has 10 hectares of hazelnut plantations which go to make the famous Nutella! This duality of farming ensures he is always able to put the care and quality into his wines, making them live up to his highest standards and producing world-quality wines!

Renato Ratti: Mr. Renato Ratti began the winery in 1961, and now his son, Pietro, continues the family winery. Pietro modernized many aspects of the winery,creating a new cellar and exploring the use of Austrian oak for barrel aging. Frederico Oberto, a well known winemaker from the Piemonte works at Renato Ratti, while making his own wine on the side, and ensures both are always respecting the nature of the Piemonte, and the reputation the region has received!

We arrived in Florence, the heart of Tuscany, in the largest winter storm of the year, and one probably beating records of years past. With so much snow covering the city streets (see above) we were welcomed with no public transportation, and a backpack bearing blizzard-trek to find shelter! The result though, produced a beautiful blanketing of the Renaissance city, and the picture below can serve as a more accurate representation of a winter-time Florence!: 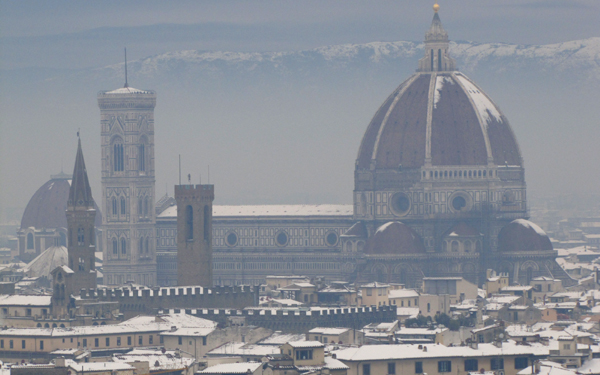 Tuscany is located in central Italy along the western coast, and is home to some of the world’s most notable wines including ‘Chianti,’ the powerful red coming from the Sangiovese grape. Probably the most notable event to have occurred in modern times with developments of the wine region happened in the 1970s, with the evolution of the ‘Super Tuscan’ wines. Although in 1986 the first ‘Super Tuscan’ wine was made by Azienda Agricola San Felice under the name Vigorello, the popularity and impact of the Super Tuscan wine is largely attributed to Piero Antinori in the early 70s, who decide to promote the Cabernet Sauvignon and Merlot blended wines (thus a wine being declassified and on par with common house table wines) and go against hundreds of years of regional classification. The result, the Super Tuscans, immediately gained fame for their intensity and power balanced with sophistication. They became ‘cult’ wines, highly sought after for collectors, and commanding prices far above the ‘common house wine’ label they were forced to bear. Now, classification laws have changed to allow the Super Tuscan a classification term they deserve, and Piero Antinori went into history for openly and proudly breaking the mold of classifications.

Although the snow storm of December stopped us from visiting the vineyards themselves, as all transportation was blocked, we were invited in Florence by two of the most famous wine families of Italy and the world nonetheless, the Antinoris and Frescobaldis. We also received a donation from the cult winery ‘Ornellaia,’ the epic partnership between the Frescobaldi family of Tuscany and Mondavi family from the Napa Valley, now one of the premier cult wines of the world. We owe special thanks for their very generous donation.

Marchesi de’ Antinori: The Antinori family has been making wine in Tuscany since 1385, and as mentioned in the text above, had a great role in the pivotal success of Tuscan wines in the 70s with the advent of the ‘Super Tuscan,’ by Marchesi Piero Antinori, pictured above. We received a very warm welcome to the Florence based Palasio Antinori, and are very proud to showcase a magnum bottle of their cult wine, Solaia, signed by the Marchesi himself.

Marchesi de’ Frescobaldi: The prominent Florentine family has been involved with winemaking in Tuscany since the 14th century, and played an important role in the development of Florence and Tuscan wines throughout the middle ages and beyond. Recently in 2006, the wine family created the cult wine Tenuta dell’ Ornellaia with the Robert Mondavi family of the Napa Valley. We were very honored to meet with such a prestigious group of Tuscany, in their wine bar and restaurant located in the center of Florence. Tuscan wine mixed with Florentine history as we talked with Frescobaldi family representatives Giuseppe A. Pariani and Karin Mausser, and were very pleased to hear of their donation of a vertical of their top ranking wines Luce and Luce Brunello in a collector’s leather case, to accompany the two bottles of ‘Castel Giocondo’.

~Anja and Georges, signing off with a photo of Sebastiano Ramello and Giuseppino from Ghiomo! 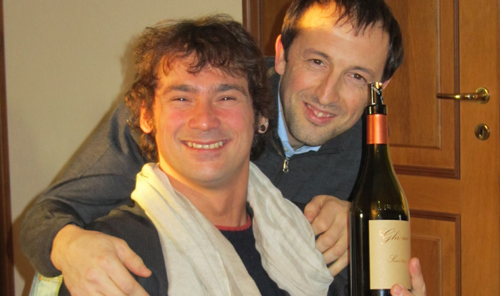 This entry was posted in Europe, Italy, Uncategorized- All Blogs. Bookmark the permalink.