Sneaking into 2011 with our January visit, our ‘2010’ tour of vineyards for charity wine donations proudly ended with the home of ice-wine, the eighth largest wine producer, and the fourth largest consumer in the world for wines: Germany. Our trip was inspired by Manuella Webber-Witt, who upon hearing of our project contacted us by email and (rightly so!) said we could not end a wine tour without visiting such an important player in the wine world as Germany. With the help of the Weingut Forschungsanstalt Geisenheim (Wine Institute of Geisenheim) where Manuella performs her PhD research on wine allergens, and Hilke Nagel from the VDP (the wine association of Germany), we focused our wine collecting on the Rhineland-Palatinate, a region which accounts for about 60% of German wine and where 6 of the 13 regions for top quality German wine are situated.

With the VDP’s help, we were able to receive donations representing some of the best of the Rhineland-Palatinate, including the Rheingau, Palatinate, Franconia, Württemberg, and Mosel regions. Our physical visits however were concentrated in the Rheingau, a small region situated on a bend of the Rhine River, who while accounting for only 3 percent of vineyard area of Germany, houses many of the top icons of German wine. The area has a somewhat higher than average proportion of Riesling, at just over 75%, with the rest being comprised of Spätburgunder (Pinot Noir), and Müller-Thurgau. It was quite a charming region, centered around the historic town of Geisenheim. 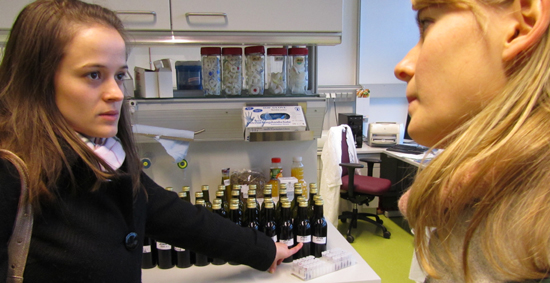 Manuella Webber-Witt showing her research at the Geisenheim Institute. 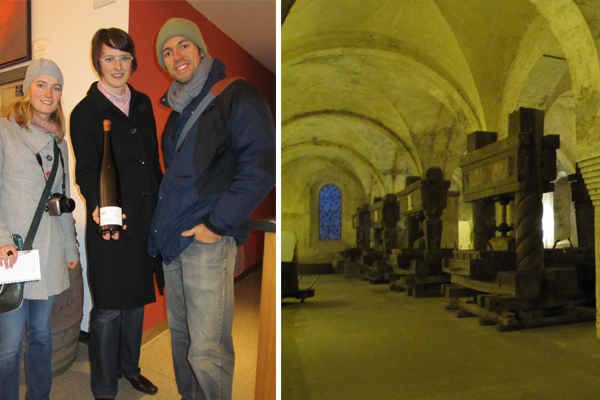 Kloster Eberbach: Founded as a monastery in the 12th century by monks from the nearby French region of Burgundy, Koster Eberbach is today the largest wine producing estate in the region. It has had a history throughout the centuries ranging from at one time being the largest monastery in Germany, to being the burial ground of the man responsible for the first Riesling plantings, Count Johann IV of Katzenelnbogen, to later having its barrels looted to quench the thirst of revolutionaries during the German Peasant War. In more modern days, it’s beautiful monastery architecture served as the backdrop for the film “The Name of the Roses!” We are pictured above with Cornelia Schlepper and the great Riesling Magnum doantion, and with ancient presses stored in the Kloster!

Schloss Johannisberg: This schloss or castle prides itself in bringing the full characteristics out of the fruit by using old barrels. The winemaker perpetuates his favorite yeast strain that he found years ago, by adding it every vintage to start fermentation in the barrels. This adds even more unique personality to the wines. Mr. Philip, onsite encyclopedia and in charge of hospitality, gave us the tour of the underground cellars, which ended in a candlelit tasting, showed above (with Manuella accompanying us for the tour). 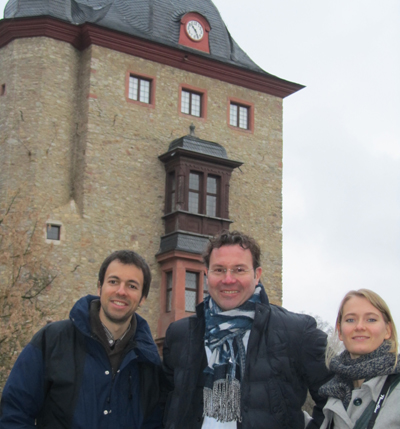 Schloss Vollrads: With Christof Cottmann pictures above, we received a tour of the oldest wine estate in the region. Their historic castle grounds which include an abbey often provides the perfect wedding setting to locals and internationals. In the summer their booked every weekend far in advance! In corporation with the Geisenheim institute Schloss Vollrads is experimenting with a fully organic farming practice in one of its vineyard. This organic experiment is a big endeavor because of the difficult climate in Germany, which makes most environmentally conscious winegrowers forced to use an ‘almost’ organic method where rational intervention is allowed to save crops from disease prone conditions. We are hopeful and looking forward to seeing and tasting the result of Schloss Vollrads effort! 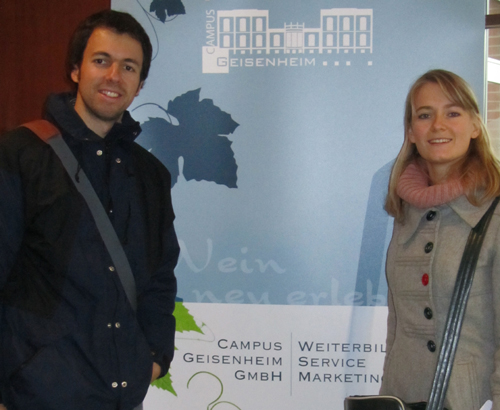 Weingut Forschungsanstalt Geisenheim: Started in 1872, this research instute / university / working winery is what the center around which the Rheingau’s innovation occurs, and where most family’s send the next generation to learn winemaking science and continue family wineries. Credited with advances and innovation in German winemaking, the Müller-Thurgau varietal which was mentioned above as being a part of many regional vineyards was invented here in 1882. The institute also boasts one of the largest yeast libraries in the world. As no small feat, Weingut Forschungsanstalt Geisenheim along with all of the above also creates many award winning wines, and we are very happy to feature some of these in our auction! One interesting side note to mention also is that for those readers following our Australia blogs, Prue Henschke from the Henschke winery in the Barossa Valley came here to study winemaking! The institute has a great student community with a very welcoming atmosphere, and we were honored to present to the students and professors our World Wine Tour project!

Friends from the Forschungsanstalt Geisenheim donating wines after our presentation:

Upon presenting our project and our Hong Kong wine auction to benefit charity, several students from the university came to us eagerly, and wanted their family-run wine estates to participate in the charity project as well. We were very honored and touched, and will have our auction feature very unique and prized wines from two special wineries, from the Palatinate: Espenhof and Margarethenhof.

Espenhof: Nico Espenschied studying enology at the Geisenheim University came to us after our presentation, eager to share his family’s wine for our charity auction, and will hopefully be a future torch bearer of the World Wine Tour project some year in the future! For his winery’s donation, he went down into the family cellar and came out with three 0.7L bottles of fantastically preserved 1986 Flonheimer Binger Berg! It is a Spätlese , which means it is sweet, and from Huxelrebe grape, an indigenous varietal vary famous for its bouquet of aromas, only growing in certain places in the Rhineland-Palatinate. It won a gold medal at the administrative office for wines, which was the official wine rankers in those days. We are very happy to feature these three, extremely rare bottles (there are only 28 left in the world!). Nico’s tasting notes: Nose very aromatic, with ripe passion fruit, dried oranges and mandarins, and some spicy eucalyptus notes. On the tongue is has great acidity and structure making it quite fresh! Overall, a fantastic addition for the auction, especially for collectors and rarity-enthusiasts! Thank you! 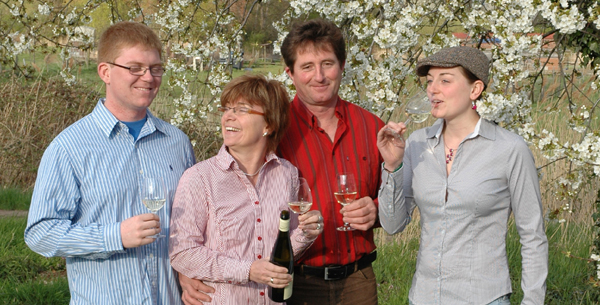 Margarethenhof: Yvonne Lucas also came up to us after our Geisenheim Presentation, where she studies viticulture to carry on her family winery’s vineyards. We were very pleased to hear about the small winery of her family, and that she would be very happy to contribute wine to our charity auction! Also coming out of the family cellar, Yvonne found a 1999 Forster Stift Ehrenfelser Eiswein. Forst is the name of the village where the vineyard is planted, Stift is the name of the vineyard itself, Ehrenfelser is the varietal, and Eiswein is german for Icewine! The Ehrenfelser grape is a cross of Riesling and Silvaner, created at the Geisenheim institute in 1929! It is famous for its fine, fruity bouquet, with apples, grapefruit and peach. The 11 year old wine still has its intense golden color characteristic of icewines, and Yvonne even remembers the exact date and time of the grape picking: The 22nd of December 1999 at 2am, with -9 degrees Celcius! At that time and temperature I’m sure everyone would remember, but it’s what is necessary for an icewine to be made! We are very pleased to feature this wine at our charity auction, a wine the Lucas family has been keeping (only around 10 bottles) for only very special occasions, and we are very proud they chose our auction as one of them! Thank you!

~Anja and Georges, signing off with a photo of our Geisenheim presentation! 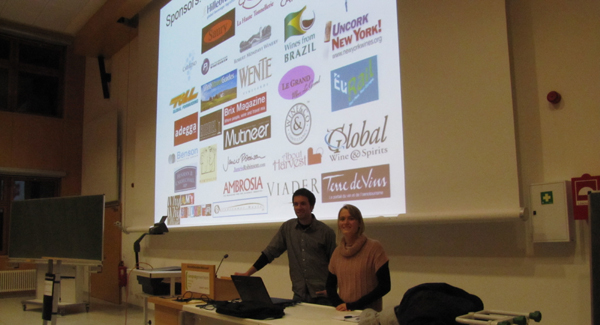 This entry was posted in Europe, Germany, Uncategorized- All Blogs. Bookmark the permalink.