The Charity Wine Project story was published with dedicated stories in a number of magazines world-wide. Click below to download the PDFs of the articles!

Brix is a Canada based wine-tourism Magazine, published quarterly. Read below Brix’s own account of our trip, especially the Ontario issue when we visited them and they accompanied us to all of the Niagara wineries! Articles were published throughout the 2010 year.
Brix 1: Introduction
Brix 2: Asia
Brix 3: South Africa and Australia
Brix 4: Ontario, Canada

Ambrosia is an India based Alco-Bev Magazine. Published monthly, we wrote many articles starting from June 2009 and going on throughout the 2010 year, but we were only able to get our hands on the digital copies of the first two publications in Ambrosia:
Ambrosia 1: June 2009
Ambrosia 2: July 2009

The Wine Enthusiast is an internationally published and highly regarded Magazine in the wine industry. The publication below covers an introductory story to the project.
Wine Enthusiast Magazine February 2010

An early ad promoting the project: 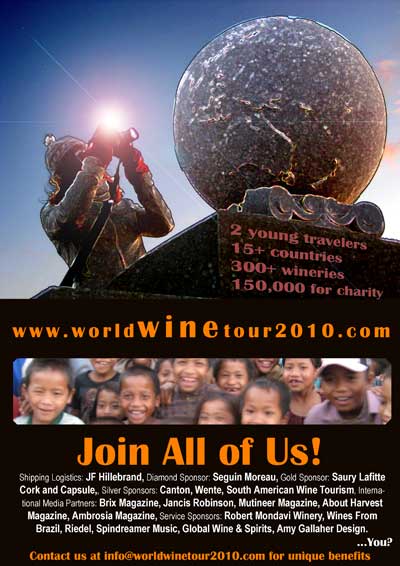